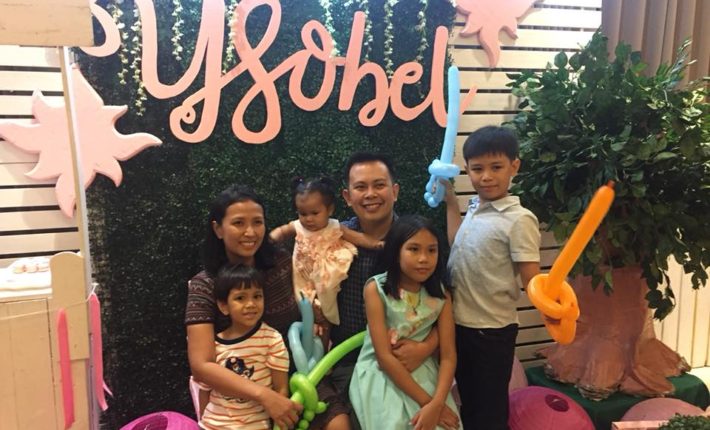 We normally don’t do parties. I mean catered parties. We do love get-togethers though. Pero the ones we had were usually eating out in restaurants, or hanging-out at home then pa-deliver ng Shakey’s pizza, Amber’s pansit and barbeque, or KFC bucket. For kids’ parties naman, we had a few fastfood/resto parties, but mostly we either went to a play yard or pool, and just had food delivered. But catered ones, my husband and I only had it twice, our wedding in 2006 and our firstborn’s baptism in 2007.

So fast forward 11 years later, we were faced with a choice of having a simple restaurant dinner or a big event. Our initial plan was to just have dinner with very few guests. But then, when we started choosing whom to invite, unti-unti nang humaba na yung list. So we decided: “Big event na lang. Last na naman to.”

By the time we decided this, we already had a reservation in our parish church. We just needed to fill out an application form, submit photocopies of our marriage certificate and our child’s birth certificate, and pay the reservation fee. It was nice din that the payment for the church already included the candles and white cloth. Her dress was a hand-me-down, so all I needed was white shoes (which I eventually got from Mothercare).

Now for the venue, we decided to use the function hall in our condominium. Kasi we were thinking na after the party, we’ll just go up once we’re done. Plus since we have a baby, if she needs anything (like a nap or diaper change), it’s more convenient if the house was just an elevator ride away. The venue was nice. However, the parking was the problem. May mga elder relatives pa naman ako. Imagine kung palakarin ko sila nang malayo. Buti na lang they were nice about it, no complaints.

Finally, for catering, we chose Verleo. From their website, I saw good photos and setup. Plus I went to an event they catered before, the food was okay naman. And they have a lot of choices of food packages. We were also able to create our own menu. We had Yangchow fried rice, Cajun chicken and bacon pasta (my husband and some of our guests liked this), baked fish with sour cream and cheese, Hickory bbq ribs, braised beef in creamy mushroom sauce, broccoli and carrots gratin, mango crepe, and almond fruit cocktail. Sayang lang na I was not able to take any nice photos of the food. Naisip ko pa naman dati, ang helpful ng mga blogs na may photos ng food kaya gagawin ko rin yun. But no, nada! I just have to say though that their setup looked really nice, and the waiters were very professional. Sayang lang talaga kasi I didn’t take any photos.

The ones I listed above (church, venue, catering), I consider them the important ones. If I get just those three, that would be good enough. The other party-related suppliers, for me, extra na lang talaga. Pero sa totoo lang, medyo pressured ako kasi we will invite relatives and Ivan’s officemates from his current and previous works. So even though the setup of the caterer is already nice, I wanted to make the place look prettier.

Initially, I planned to DIY at least a stage backdrop, kasi fun naman din siya for me. But then, our yaya left, so I had no time and opportunity anymore to go to Divisoria and create things. Pero buti na lang din, kasi on the day of the event, hindi ako stressed. I’ll DIY party decors na lang next time. Pero grabe ah. I discovered a lot of things in designing a party like lights, backdrop, balloons, letter standees, paper lanterns. I discovered a lot of suppliers like props rental, buying Divi things for you, and those that create name decors made out of styro. Ang galing nila. Eventually the suppliers we chose are for venue decorating, cakes and other sweets, and host magician.

For decorations, I talked to several suppliers. Pero I liked Party in Style PH. Ang ganda ng mga setup nila. And Miss Annalyn replied quickly and straight to the point especially when it came to the prices. Initially, we wanted stage design only, but eventually, we also got ceiling decor. We were able to talk about a particular design within our budget. And the output of their work was really good. The backdrop looked great. I did not have a problem with the spelling of the name (peeve ko yan). I expected just paper lanterns for ceiling decor, but they also put styro suns. They also came early.

For cakes naman, I thought sayang naman ang decor kung wala man lang cake. So I looked through the facebook pages of different cake suppliers. I chose Sweet Treats by Sandra because her cakes look really well designed (maganda and malinis ang gawa) and because Miss Sandra was very quick and helpful in her responses. And I was happy when I saw the cakes. Ang ganda! We also got cookies, mini cupcakes, and macarons. They also tasted great; Ako yata nakaubos ng macarons and mini cupcakes. Hehe.

My husband was the one who chose entertainment. Normally kasi in parties, siya ang host. He said he wanted to mingle so naghanap siya ng host. He chose Rjhay Clemente. Rjhay was our host, magician, ventriloquist, and balloon twister in one. Super sulit. The kids enjoyed the program. Nabilib yung guests sa dami ng ginawa niya and also with one of his tricks with a board that talks.

All in all, I enjoyed the party. I think the decorations were pretty. The cake looked and tasted great. The food and service of the caterer was good. The entertainment was good and super sulit too. I’m satisfied with them. And I am so glad we decided to have a big party. Minsan lang naman so go big na.