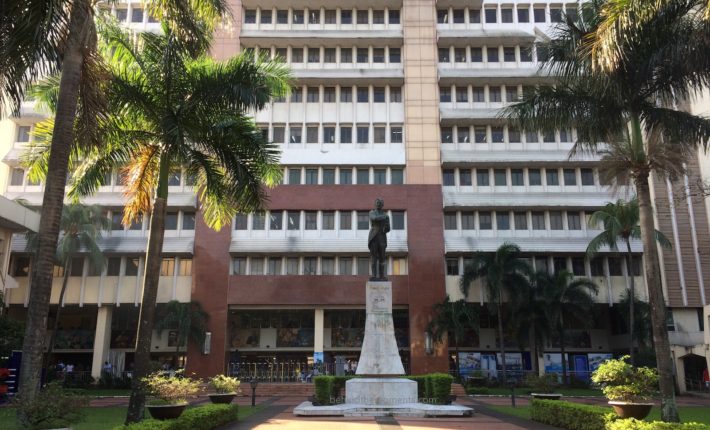 It’s tax season again. And in the case of real property tax, having shorter queues is not the only perk you get when you pay early. Most local government units give as much as 20% discount to those who pay earlier. For example, you get 20% discount if you pay on or before March 31 of the current year in Quezon City. In Calamba City, you can get the 20% discount if you pay on or before December 31 of the previous year for current year’s real property tax. Some local government units also give discount (usually 10%) if you decide to pay before each quarter ends. I wanted to get these perks so I planned to pay early.

Few weeks ago, my husband joined me in paying our Quezon City real property tax. This would be the first time we will pay directly in Quezon City hall. We entered the QC Hall compound from QC Circle through Gate 1 (in front of the city hall building). We arrived at 8am, and there were already a lot of cars parked.

Assessment and payment for RPT are located at the back of the building (along Mayaman St. side) beside Landbank. When we entered the assessment area, we showed our documents and were given a number. When it was our turn, we showed last year’s RPT receipt to the assessor.

You might wonder where we got last year’s receipt if this was our first time to pay. In this case, we asked for a copy from our developer. Last year’s RPT was paid by them. So we paid our developer for last year’s RPT, and then they gave us copies of the receipt, Condominium Certificate of Title and Tax Declaration. I also brought copies of the CCT and TD in case they might be needed. Fortunately, for our assessment, last year’s RPT receipt was enough. The assessor then gave us a tax bill. It shows the breakdown of the fees. It also notes that it was transferred from a different tax declaration number.

We then proceeded to the payment area where we were given another number. As we waited, I decided to get free coffee. When I returned to my seat, my husband was already paying at the counter. Ang bilis! The whole thing went much better than expected.

In Calamba City, the steps we did to pay RPT for the first time (in 2016) were basically the same – get assessed then pay. We just had a Statement of Account to present to the assessor. This Statement of Account was from the city hall and was forwarded by our property manager. It had an expiration date, and it was already expired when we went to the city hall. We showed this expired SOA during assessment, and the assessor gave us an updated one. Then we showed this new SOA to the cashier. There was no number, but there were very few payees. I think we were finished in 15 minutes.

I appreciate institutions that think of ways to make things easier for the people. First, I discovered that one can pay Quezon City RPT on a Saturday. I also discovered that there are other payment options other than going the city hall. GCash is one of them. So I checked it and saw that I can have assessment or pay or both. I tried getting the assessment, but I always get stuck after entering the Tax Declaration Number. When I saw a GCash booth in city hall when I paid, I asked them why the assessment wouldn’t continue, and they said the system is probably down. So I haven’t really used it until the end, and I can’t say if it really works. If you want to try, you may visit the guidelines in using GCash for RPT listed in the Quezon City official website.