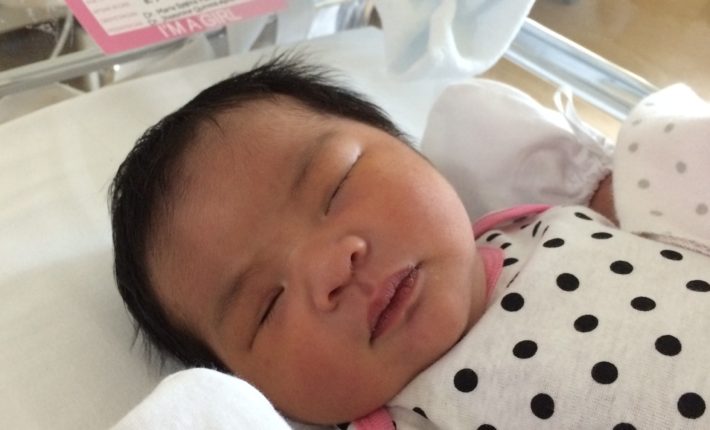 This is the birth story of my fourth child. For this story, I’d like to start days before the actual labor day. You see, the waiting game felt really long this time. One reason was that I expected her to be born earlier than the expected due date, which was July 5. And each day past this date felt longer. For days, I did a lot of walking, much more than in any of my first three pregnancies. I walked almost every night with my husband. I walked in the mall. I climbed the stairs. I even danced with my kids while watching Saskia’s Dansschool in Youtube.

Aside from walking, I also did some ‘turning’ exercises. I felt that she was facing forward because the shape of my tummy wasn’t round. And I’ve read that with this position, there is a higher probability of having cesarian. I would do my best to avoid that. I knew that I had good chances of having my third VBAC, and this position felt like a threat to that.

It was Sunday. My husband and I had planned to go to U.P. to have more walking sessions. But I woke up at 3:30a.m. Since my third delivery started in a similar way (with me waking up much earlier than usual) and we were four days past due, I checked for contractions. And indeed, there were some very slight ones. I noticed that this time though, my back felt sore. But an hour later, there were more contractions near the front.

My plan this time is to walk some more. So at 6am, we started preparing to go to U.P. Then, we stopped at Coffee Project near ABS-CBN for breakfast. We planned to walk some more, so I joined my husband in Puregold to buy some groceries. During our walk, the contractions were about 20 to 40 seconds long, 5 to 10 minutes apart, and pain level ranged from 1 to 3.

When we got home, I decided to rest. This included lying down and watching a movie via Netflix. From this time until we started preparing for our drive to Makati Medical Center, my contractions have gotten more painful (about level 3 to 5). And they were about 30 seconds to 1 minute long.

We arrived at MMC at 5pm. But we didn’t go to the delivery room yet. Instead, we walked some more along the empty halls (remember that it was Sunday so the the clinics are closed) and even around the hospital from the entrance at Amorsolo Street to the entrance at the back along HV dela Costa Street. I had a dilemma then. I didn’t know how far into labor I was in. If I go to the labor and delivery room (LDR) soon, I might be strapped to the fetal monitor for a long time which might increase the probability of cesarian. But if I waited too long, there’s the risk that my OB might not be able to arrive on time. And her residents might not be as supportive of my desire to have a VBAC. I consciously monitored my contractions then. We continued walking and also had late merienda before we eventually went to LDR at 6:45pm.

I was checked by the resident doctor. My cervix was only 2cm dilated. What?!! I should have stayed outside.

I was eventually admitted at 7:30. Again, we decided to use the birthing room. Disappointing yung dilation, but I was still grateful for several things during this time. First, I wasn’t strapped to a fetal monitor. Second, they didn’t put an IV line yet. Third, they let me have dinner. So para lang akong in a hotel room eating dinner.

Then at 8:30pm, my cervix was checked – only 3cm dilated. I was attached to the monitor then. While attached, the pain usually reached level 6 to 7. Then after 30 minutes, I was unhooked again. I noticed that the pain was less when I was standing, only about level 4. So even while I was in pain, I was excited and happy. Everything was much better than expected.

(Bit of background: During my regular checkup, I told my OB that I wanted to be able to walk around during my labor. She said she will allow that, but I had to be checked every 30 minutes especially since we were hoping for a VBAC.)

At about 9:45pm, I was strapped to the fetal monitor again. And the resident doctor did another internal exam. This time, my cervix was 4cm dilated.

The next events were not so fun. I was informed that the anesthesiologist was already available. I said I didn’t want anesthesia yet. Then, I was informed that he might go to another hospital to check on another patient. He might be back in an hour or so. What?!!! A lot of things can happen in an hour! I don’t know what made me less demanding that time. Perhaps then I felt that I didn’t have choice. Normally, I will ask several questions first. Or demand for options. But that night, I just accepted it. Besides, it wasn’t that bad. It’s just not what I had planned. You see, I wanted to delay getting the anesthesia for two reasons. First, I’ve read that just lying down during labor might prolong labor. And second, I didn’t want to have chills again, or at least just have them for a shorter time. The chills during my last two labors were so bad that I’d rather choose labor (up to a certain extent).

So, anyway, around 10pm, I had my epidural. The procedure was better because I only had to sit at the edge of the bed. (Not like in my first and third labors where I had to lie sideways and be held tightly by a stranger). And there was a good thing that happened here. My lower body wasn’t completely numb. I couldn’t feel the pain of the contractions, but I could move my legs a bit. I don’t know if my OB informed my anesthesiologist about my request of getting just a small amount of anesthesia (kasi this was what I experienced during my second labor), or this is really the anesthesiologist’s style. Also, I did get chills again, but they were manageable. Ivan only had to rub his hands and put them on my ears or eyes.

Now that I didn’t feel the pain, we decided to distract ourselves by watching Netflix. We chose to watch Jokoy because we wanted something light. It wasn’t light. It was hilarious! I was literally crying from too much laughing.

At around 10:30pm, my OB arrived and broke my water bag. Soon after, she did an internal exam. And my cervix was now 7cm dilated and 60% effaced. Whoa! That was fast! I thought that with this pace, I might give birth in the next couple of hours. But when I was checked an hour later, nothing changed. Another hour later, at 12:45am, the effacement improved but the dilation was still the same. My OB then told me that she will check again after 30 minutes, and if I wasn’t dilated completely, we would have to do cesarian. Yikes! (Hours later, when I was recovering in my room, my OB told me that she was in anterior position nga.)

At 1:15am, my OB did another internal exam. Unfortunately, nothing changed. I even bargained for an extra hour, but she did not give it anymore. She said that there were dips in the baby’s heart rate already, so we really had to do cesarian. I was sad, but I did not question my OB’s decision anymore.

A few minutes later, I was wheeled into the operating room. And when they were ready, they let Ivan stay with me. Maybe it’s because of the disappointment of not being able to do VBAC and the fact that I woke up really early that I felt very tired and sleepy during the operation. Everything was hazy. I remember that someone was explaining something to me. And when she or he was done, I told my husband, “Ikaw na bahala dahil wala akong naintindihan sa sinabi niya.” Sobrang antok ko na talaga. I remember trying to talk because I was forcing myself to stay awake. I also remember staring at the lights that looked like a bee’s hive. And I also remember when my OB finally said “Baby out.” And then I saw her, our fourth baby, being placed on her cot. Born at 2am and weighing 7lbs and 14oz, there she was, our little Ysobel.